I am SLOW BEAR. I am a one-man-band who makes alternative music. I like the sound of tape recorders, rivers, typewriters, trains, fire, cheap guitars, night and dawn, footsteps, and my own heartbeat is my favorite drummer. Though I often play on my own, my goal is smilar to that of a band: to bring across the energies that tremble in me, to ride the lightning!     [...]

Awesome review of my show with Granola Import in Leuven, by Over From Underground .
"Gradually you become absorbed in the atmosphere of the concert without immediately realizing it. The up-tempo opening songs of 'Fucking Off' speed up the pace of the show, after which the mesmerizing, stamp-driven 'Hippie Hustle' effortlessly causes a boost in the dynamics. [...]

Single 'Normandy and Me', supported by the low pitched vocals of Granola Import, finally brings closure to a musically very interesting evening for everybody who is prepared, ignoring all norms and conventions, to become submerged in the world of Slow Bear."

And another very nice review of my new album, in Camino Verdraait.
"To classify the music of Slow Bear under one all-encompassing denominator remains a difficult assignment, even after having listened to the album for several times. More than as a singer-songwriter he sounds like a onemanband, because even though Slow Bear has played almost all instruments on the album by himself, with the exception of a stray bassline or a shred of percussion every once in a while, Fucking Off sounds like the work of a fully-fledged band. [...]

With Fucking Off, Slow Bear, in our opinion one of the more underrated Belgian talents, again delivers a beautiful, varied and adventurous work that skillfully bypasses the cliches of his genre. In doing so he does not always make it easy on the listener, but whoever perseveres is rewarded with a record that distinguishes itself on all levels from the often predictable sound of the Belgian scene."
Read full article (in Dutch)

Cool review of my new album in Over from Underground.
"In a distinctive production that doesn't always reveal how the analogue beats were made, the propulsing rhythm creates a steady tempo throughout the first album half. A turning point can later be found in the mesmerizing and captivating 'Spirit broken (I fixed it)', where subtle piano strokes and fuzzy guitar parts enter in a long, moving, up and down meandering dialogue.[...]

With 'Fucking Off' Slow Bear again explores new territory in americana and roots music, choosing a more adventurous path in a less comfortable landscape. The album as a consequence sounds edgy, endured and born from necessity."

Impose Magazine did two very beautiful articles on the videos I made with David Van de Weyer. I thank and greet Michael Brummett for his nice and insightful words!
"An ode to peace & humanity, as a demonstration of songsmanship in its purest form. [...]

This is the beauty of art, music, humanity, creation, and creativity. 5/5"
Read more:

A heart-warming article in national newspaper Het Nieuwsblad about my collaboration with filmmaker David Van de Weyer (in Dutch).
"Normandy and Me is an atypical video. Image and sound enter in a dialogue with one another, in a poetic production of six minutes. [...] In his unique style, David Van de Weyer of Daveyer Audiovisuals delivers saturated colors and mystic lighting. [...] The film contains direct references to wars from the 19th and 20th century. By using authentic attributes and historic footage a link is established between the contemporary sociopolitical context and events that caused terror and violence in the past. 'With this film we want to create the belief that we can make a beautiful place of this world again, where liberty, equality and brotherhood are not hollow concepts', say Van de Weyer and Slow Bear'. " 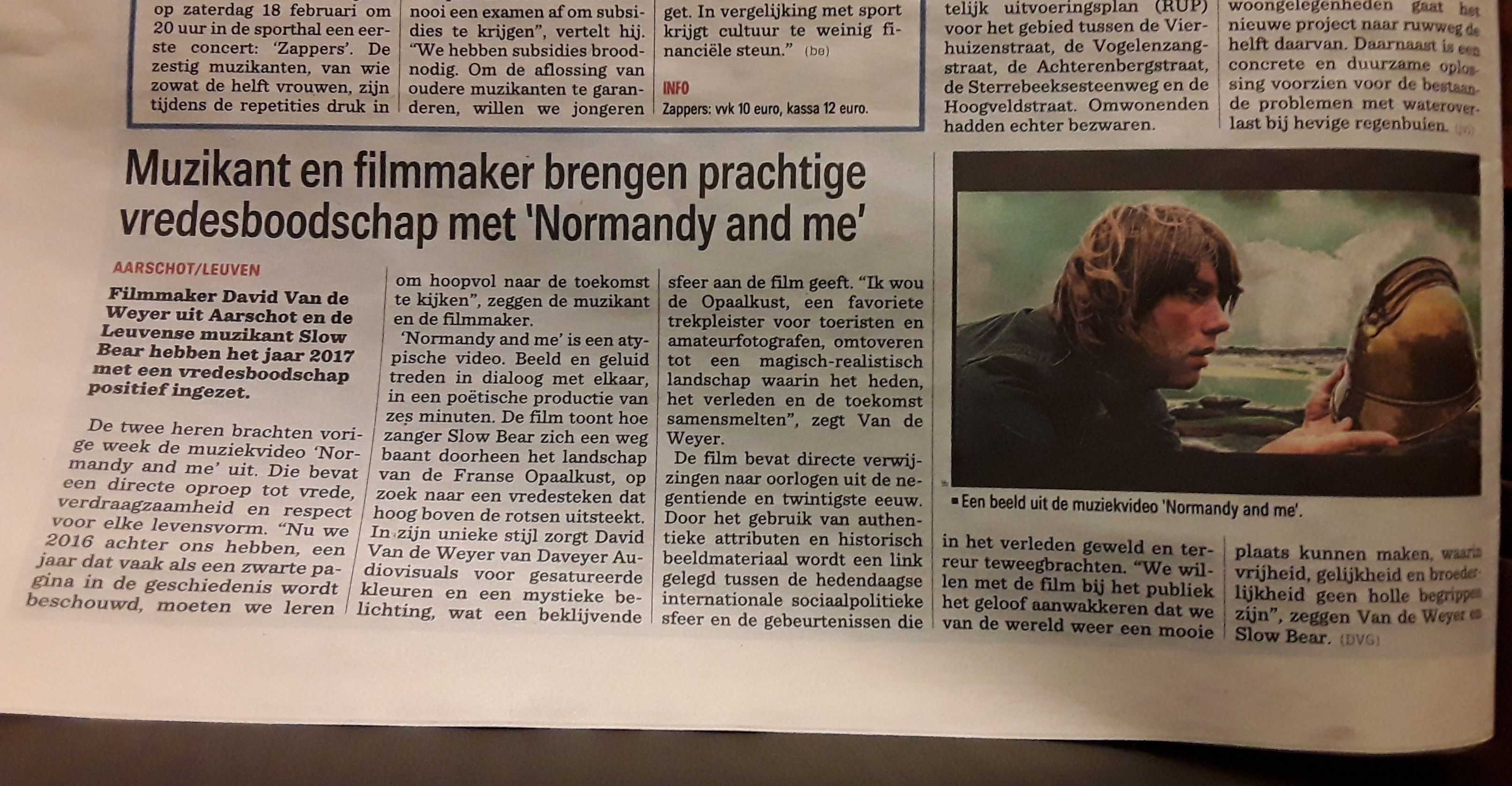 Pale Morning Fades got some cool reviews from a variety of music zines. Cheers to all who gave it a spin and took the time to write down their thoughts!
"With strong influences of delta blues, grunge and lofi-rock, Slow Bear - on his intriguing debut- combines some of the purest and most honest genres from musical history. [...]

Due to its adventurous, risky and unbridled nature, Pale Morning Fades might take some time to acclimatize. It does not happen every day that one is served a record like this. On top of that, Slow Bear demonstrates that haunting atmospheric imagery and inspired songwriting need not necessarily contradict one another. "

Over from Underground was at my show in Trefpunt, Gent (BE), and wrote a nice review about it (in Dutch).
"The Leuven-based onemanband puts sparkling, somewhat folky garagepopsongs in an organic sequence with longer, mesmerizing material, initially backed by powerful fingerpicking, sensitive hooks and rhythmic attacks on acoustic guitar. [...]

Slow bear is undeniably driven by an energy that manifests itself both underneath and above the surface, and on his own he manages to give his live performance a remarkable dynamic. While in its entirety it sounds strikingly edgy, the combination of rhythmic and melodic catchiness with the intensity and honesty of the songs inspires the spectator to become strongly involved."
Read full article